Direct from their pens, our children tell us about how they spent the winter on the farm.

Winter is now over but before it ended, we asked the children how they spent it and their feelings about it. As usual, their accounts are very genuine and this is always a pleasure for us.

Here are their letters. 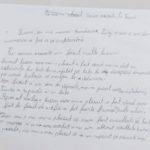 This winter I did lots of things. The first thing that I liked was to go skiing and when I helped my father shovel snow off the road to go to church. I made a snowman, played with Denis, Lorena and Luiza and we threw snowballs with my father. I also liked when we went to watch fireworks (for New Year’s Eve), it was very lovely. The thing I did not like was when I did not obey my mom and dad and did not study and as a result, did not get good grades in school 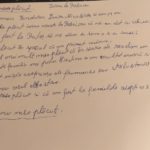 This winter in Rebricea I liked skiing and going to Rates-Cuzei (part of Rebricea) on sleds and with a sack. I especially liked receiving gifts at the end of the year. Most of all I liked New Year’s Eve when we went to Vaslui with all of the family except Cristina (the Stroi’s daughter who lives in Germany). I listened to music and I watched fireworks that were so beautiful and bright that they lit up the sky. I also liked when we went to visit adoptive families (meeting with other families that have foster children). 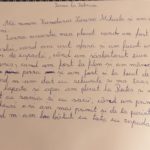 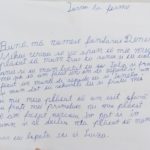 I want to tell you that I liked it when we went on the snow with a sack and with a sled. Then we made snowballs with my father and my brother and sisters, we made a snowman and then I skied with my siblings.