A hot and blessed August in Romania 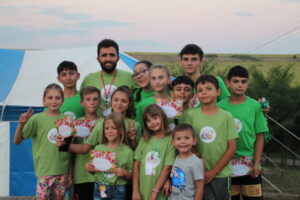 [translation by Renée Schalks]
After 3 years we finally managed to organise a summer camp for kids at the farm in Rebricea again, and sponsored another camp in Draxeni 7km away, all thanks to God.

In truth us Italians did relatively “little” other than contributing financially and above all praying that everything would go as well as possible. This time our Romanian brothers and sisters were the real workers, and did a truly flawless job.

Denis and Lavinia Zlatan, Nicu and Mihaela Stroi and some local evangelical Christians, together with a dozen Christian guys from different churches around Vaslui, helped with the logistical, practical and above all spiritual organisation of this activity that we care so much about. We could say that they’ve finally revived a commitment in which we want to invest all our energies – economic, physical and spiritual. We want more children and young people to experience God in their lives, and show them how Christ can ease the hardships in their lives.

Really important to note is the help that our oldest kids (Luigi and Luiza Fandarac who are now 17 and 15 years old) were in the two camps. According to Denis Zlatan, who managed the spiritual and organisational pieces, this experience allowed them to deepen their knowledge of God, and made them strongly consider dedicating their lives to him and giving their all to him.

The formulas used for the 2 camps were that of a day camp, not that different to those of the “summer centres” also organised here in Italy. The only difference is that all activities are focused on teaching the word of God and preaching the gospel, through games, recreational activities, moments all together, prayer, evenings in front of a bonfire, and songs. The leaders and organisers of the camp were able to take advantage of the new areas created on the farm (bedrooms, bathrooms and showers), designed to accommodate anyone who needed them and allow us to easily carry out all our activities.

We’re joyful in saying that about 220 children/teenagers were involved in the camps – 70 in Rebricea and about 150 in Draxeni. 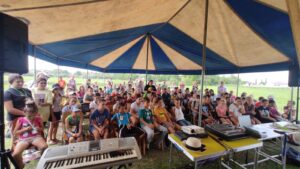 Unfortunately, however, not everything went smoothly as the drought at the time also affected the farm. In fact, during the camp there was no water, and it had to be brought in barrels. Given that the supply situation seems increasingly complicated, we think we’ll need to dig a new well so as to be independent from the council’s water supply.

In any case, beyond the logistical difficulties, we’re truly grateful to God for all that he allowed us to do in August. Above all for the opportunity to reach new families, even if that meant becoming aware of many other difficult situations to manage, as well as the real persecution on the part of those who should be taking care of the life and spiritual health of people. However, we have faith that God will help us find ways to give relief to other little souls who need the comfort and love of God, and caring for them through our actions.

Below the 2 reports that Denis Zlatan sent us straight after each of the camps finished. 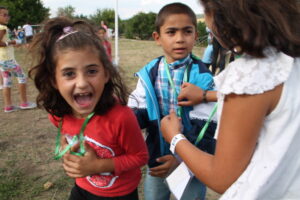 God asked us to serve him, so we understood that our calling is to tell kids about the Kingdom of Jesus Christ. And that’s exactly what we did earlier this month in Rebricea. It was a great opportunity to get boys and girls involved in serving God, with 75 kids coming to our camp almost every day.

First of all, I want to tell you that thanks to the opportunity to sleep at the farm, we were able to study the Bible every morning after breakfast, starting with Ephesians.

I’m happy that every morning the Stroi kids took part in the Bible reading and prayed with us. It was great to be able to talk about God not only with the camp kids, but with the Stroi kids as well.

The camp was called “Masterchef Academy”, and every day we taught them about some “secret ingredients” like faith, obedience to God’s rules, diligence, generosity and balance. Finally, I told them that if they want to know ingredients even more secret, they need to read the Bible. And all of them asked for one. What’s more, on 3 September we’ll re-start “happy hour” (ora felice), and the kids will be coming not only from Ratesu Cuzei (a hamlet of Rebricea), but from all the surrounding villages.

On Friday after the final lesson, I asked them if they wanted to invite Jesus Christ into their lives, and whoever wanted to could take a step forward in front of the other kids, to give us the opportunity to pray for them. And to my surprise, all the kids stepped forward.

Let’s pray for them and ask God to come and satisfy their hearts with his presence and his peace. I don’t know if all of them understood what they did, but I know this is a big step toward believing in God as their saviour.

For Friday’s bonfire, the mothers of the kids also came. All of them were very enthusiastic about what we did and what we taught their kids. One mother said they now knew all the Bible lessons and all the songs because when the kids came home they sang the songs they learned at the camp over and over again.

So the word of God reached all of their houses! Praise the Lord! 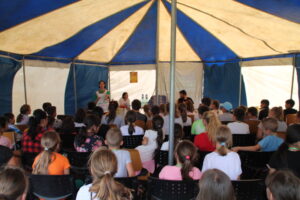 The last camp of the year was in Draxeni from 22 to 26 August, 40km from Vaslui and 7km from Rebricea.

A Christian family lives there, but there are no evangelical churches. This family goes to the church that our brothers in Rebricea go to, and they asked me to organise a summer camp in this small village because a sister from the church, Gabi, teaches in the public school there. So I went to the mayor and asked him for permission to run a camp in his village and he approved, also giving us some wood for the bonfire. We followed the same programme as the camp in Rebricea.

A great testimony of how good and faithful God is was the answer to the prayer that it wouldn’t be too hot during the camp. Until the morning on which we finished the installation the sun was really scorching, but in the afternoon when the kids arrived, clouds appeared in the sky and covered the sun to give us shade and comfort throughout the whole period. Glory to God for that!

We were expecting 150 kids, but only 106 arrived on the first day. Unfortunately, the village priest was against us for the whole period. Some parents were even told to withdraw their kids from the camp or he wouldn’t help them anymore. Sadly this priest has a reputation for manipulating everyone in the village and hates evangelical Christians like us. However, on the second day 140 kids came, and so it was until the end of the camp.

One day a drunk man came who ordered us to leave and wanted to fight with us. I invited him to leave otherwise I would have called the police, so he left.

On the last day, I asked the kids if anyone wanted to believe in Jesus and ask him to enter their lives. There were 6-7 kids with whom we were able to pray for this.

The Sunday after the camp, some of the kids went back to the orthodox church for mass and unfortunately they were beaten by the priest, who then sent them home to do penance and ask forgiveness for the sin of having been to our Christian camp for 40 days. He further weighted the kids’ guilt by denying them a supposed trip to the Black Sea that he was organising just for them. Sadly these kids live in fear and are afraid to say that they’ve been beaten by the priest.

In addition to this, he also asked to burn the new testaments that the kids received as a gift on the last day, saying that they came from the devil. 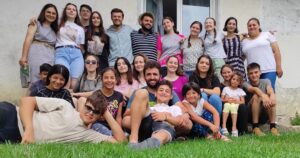 We pray for these kids and we pray that we can start a ministry with the kids of this village, but obviously we need funds, which are currently lacking.

The evangelical family living in Draxeni has made their home available to meet the kids, and I have a team ready to work in the area.

We pray for this.

God bless you for your support!

*Indicate your email in the reason for payment.